Kuwait, Oct 17: Konkani's biggest ever reality show in the history of Mangalore, “GULF VOICE OF MANGALORE” the brainchild of Lawrence Pinto and Louis Rodrigues of Kuwait concluded with the announcement of Winners of grand finale which was held on  October 17, 2008 at American International School Auditorium, Kuwait. 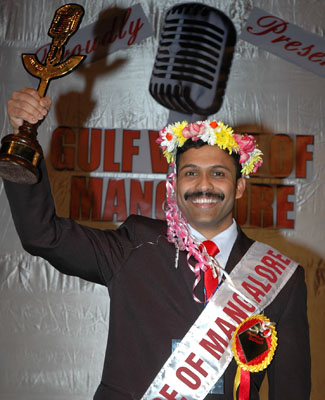 The Winner of this Mega Event and the most favourite amongst all the contestants who left the audience screaming once more - once more was Vinay Lewis – Kuwait -223 points, first runner up Donald Correa-Dubai 222 points and second runner up Edward Roshan D’Souza - Doha 215 points. The winners were presented mementos with cash prizes of One Lakh, fifty thousand and twenty five thousand rupees respectively. 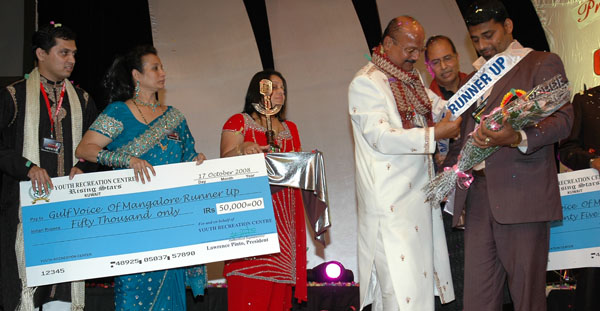 The mega event was started by compere Roshan D’silva welcoming the audience and theme of Gulf Voice of Mangalore to promote the Konkani talents. This event also witnessed celebrating 30th Anniversary of Youth Creation Centre, Rising Stars. The organizer Lawrence Pinto, welcomed all the guests and contestants from all over the gulf.  And also thanked the main sponsors John Paul Fernandes, MD, Power Control and Electronics, Lawrence D’souza, Caesars Group, PROPERTY Real Estate and Developers, Daijiworld for the live media coverage and all the sponsors without their help this event was not possible. 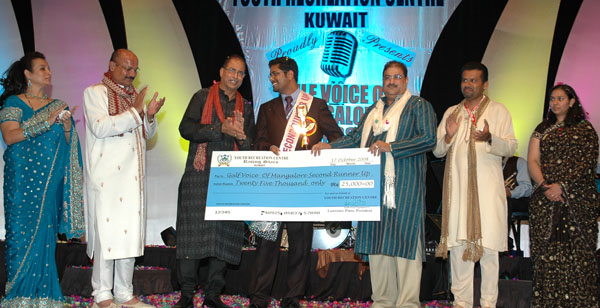 Ace orator and compere Leslie Rego has taken charge of the whole programme amidst huge round of appaulause from the audience, fantastic atmosphere in the auditorium. It is a big occasion, undoubtedly, one of the best event Konkani music has ever witnessed.

All the contestants enthralled the audience with their voice and well sung their favorite songs truly left the audience spellbound.

After the rigorous evaluation by the ace singers and Konkani stalwarts Wilfy Rebimbus, Melwyn Peris and musician Joel Pereira selected 5 grand finalists were announced  Vinay Lewis – Kuwait,  Victoria Soares – Muscat,  Edward Roshan D’Souza – Qatar,  Joylene Gonsalves – Kuwait, Donald Correa-UAE.
One after the other .all the grand finalists have left the audience spellbound with their performances of "Pranam Tuka Karthan".

The music was composed and mesmerized the audience in all the semifinals and grand finale  eventand specially flown from Mangalore Joswyn Pinto, Melwyn Fernandes, Chrisotpher Mascarenhas, Theo Alvares, Richard Monteiro.

The judges panel of Wilfy Rebimbus, Joel Pereira and Melwin Peris truly have a mammoth task at hand to shortlist the top 5 on the center stage towards the most deserving crown of the Gulf Voice of Mangalore.
After the break entertainment programme was presented by Konkan Kogul Wilfy Rebimbus along with Konkan Kogul Meena Rebimbus and Yoodlee king  Melwyn Peris entertained  over 1400 jam packed auditorium with their hit numbers. In between dances were performed by Kuwait’s most famous dance troupe Ballerines. And ofcourse rib tickling comedies by Jerry Rasquinna along with local artistes left the audience with the laughter.