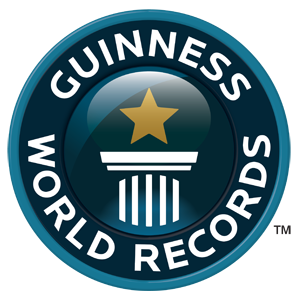 Kuwait, Nov 11: To mark 50 years of Kuwait’s constitution, a spectacular firework display worth US dollars 15 million (KD 4.163) was displayed at 4.5 km coastal area between Kuwait Towers and Green Islands.

Kuwait fired 77,282 fireworks and entered the Guinness World Records as the biggest firework show in the world. KUNA Carim Valario, a representative of Guinness World Records confirmed the record and handed over the certificate to Undersecretary of the Amiri Diwan Abdulaziz Ishaq during the event. He said, "I am happy to verify that 77,282 fireworks, a new Gunness world record has been set tonight." 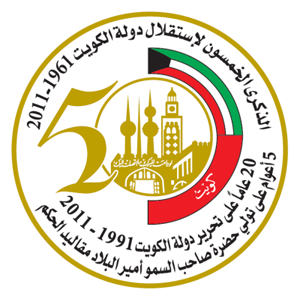 Kuwait, Feb 24, 2011: February is a month of celebration and joy for the state of Kuwait as the entire country comes together for the momentous occasions of the 50th anniversary of Independence, 20th anniversary of Liberation Day and 5th anniversary of the ascension of Sheikh Sabah Al-Ahmad Al-Jaber Al-Sabah, Amir of the State of Kuwait. The festive atmosphere is manifested by colourful lights, flags, banners and portraits that adorn every nook and corner of the country.

On February 25, Kuwait celebrates its National Day to mark the creation of Kuwait as a nation in 1961, when the British gave Kuwait the total freedom it deserved.

When faced with challenging situations in our relationships, family, work or business spiritual counselling and prayers work. Sometimes when we are overwhelmed by our thoughts and feelings it is useful to talk confidentially with someone who can help us get things into perspective. A spiritual counsellor helps to anchor and support us in focussing on the issues which are affecting us.

Dr Sneh Lata Goel, popularly known as Nuna Goel, is a dynamic, intuitive, seasoned professional, who is immensely experienced in the field of art, homeopathy, psychology and counselling. She was born and brought up in Ambala Cantt (Haryana). 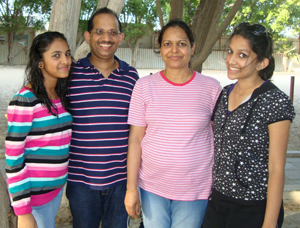 Kuwait, Feb , 2009: One cannot leave this world unless there is a call from the Almighty. This has been proved true in the case of many people who escape death by a hair’s breadth. The story of Ivan Martis, a Mangalorean, is one such example. Ivan lost all hope in life, but never lost faith in himself, and the Almighty.

Ivan who lost his heart and now lives with a mechanical heart, shares his story with Wilson Saldanha, Daijiworld’s Kuwait chief. His courage and determination is an inspiration to many and is proof that sheer will power and luck, along with some money, can give new hope to life. 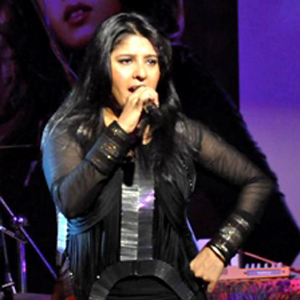 The concert, touted as the ‘Biggest Asian Show of the Year’ was organized by Creative Indians Association and Raja Company WLL. Hall 7 of Mishref Fairgrounds was converted into an ideal concert auditorium with specially set up acoustics and step-elevated seating rows so that everyone in the audience was able to soak in the atmosphere and enjoy the show.

Kuwait, Aug 22: "When two nations come together, it is unparallelled," said A K Srivastava, second secretary (information, press and culture) of Indian Embassy in Kuwait during the programme. Indeed, it was an unparallelled event beating all the records of previous events organized by Creative Indians Association.

Kuwait, Nov 22: If there is one voice that brings all the romanticism in the world to Bollywood, it is that of Arijit Singh. Accompanied by his 21-member troupe for a musical extravaganza 'Arijit Singh Live in Concert - Tum Hi Ho', proved it, enthralling music lovers of Kuwait like never before.

The concert, hyped as the ‘Biggest Asian Show of the Year with tremendous pre response’, was organized by Creative Indians Association and Raja Company WLL at the Abbas Al-Ostad Hall located in the Al-Arabi Stadium, Mansouriya on Friday November 21. After the super hit programs "Sunidhi Chauhan Concert" and "Mika Singh Live" once again Prashanth D’Souza, president of Creative Indian Association and a veteran in organizing events in Kuwait joined hands with Rohit G Mirchandani, MD of Raja Company to bring this mega event to Kuwait.

An evening to remember: Sonu Nigam takes Kuwait by storm

Kuwait, May 2: It was somewhat like a dream come true for Kuwait audience on Friday May 1 evening. They had a chance to witness a person who is often referred to as India's best playback singer and as the Golden Voice of Indipop - Sonu Nigam. He proved again that he is more than just a singer or musician. The show, Sonu Nigam live concert titled ‘Shukraan Ya Kuwait - Tribute to a great country’ was organized by Apna Bharat Society Kuwait at Safir Al Fintas on Friday from 8 pm onwards. 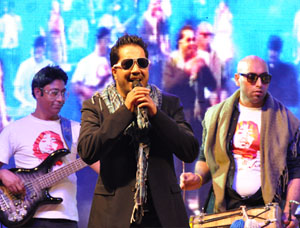 Kuwait, Apr 13: The star of the evening took the stage with his super hit song ‘chinta ta ta chita chita’ from Rowdy Rathore, amdist high voltage sound, glittering lights, two beautiful female vocal singers, live musicians and packed audience. The crowd jumped from their seats and cheered on with joy unbound. It was exactly what the entire audience had been waiting - the grand entry of Mika Singh. 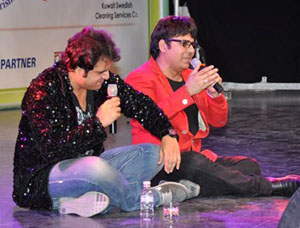 Kuwait, Nov 17: The long waiting super hit show event “Indian Carnival-2012” was organized on Friday 16 November, at American International School, from 7 pm onwards. This was 17th grand event in Kuwait by Hot Stepper, the entertainment wing of the Creative Indians Association. The highlights of the show were the performances by the comedian duo Krishna- Sudesh along with the gorgeous looking and rocking performer Poorvi and class singer Kaushik. 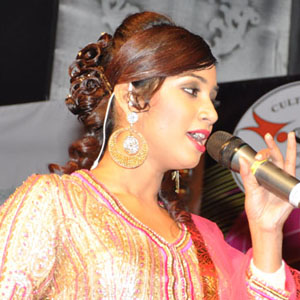 The programme started with the formal welcome address delivered by the ICS president and anchor of the day, Ashfaque Ahmed Khan, along with singing of the National Anthems of Kuwait and India. 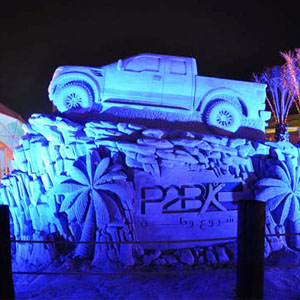 Kuwait, March 12, 2013: The sixth edition of the popular event 'Proud to Be Kuwaiti' (P2BK) was launched on Tuesday February 2013 at Kuwait International Fair Ground in Mishref.

Due to high demand for participating in this huge event, the organizers this year built an entire village on a 20,000 square meter area instead of holding it in a hall as they used to do earlier. The event will remain open for 14 days for public from 10 am to 10 pm. 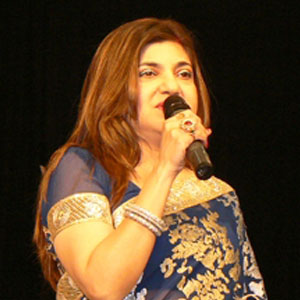 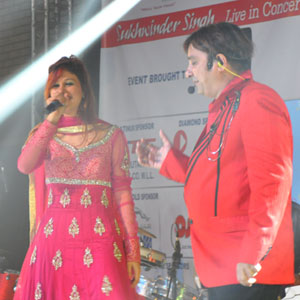 Kuwait, May 11: It was a feast to Bollywood lovers in Kuwait. After the show of Baadshah of Bollywood Mika Singh by Creative Indians Association in April, within a month superstar singer Sukhwinder Singh charmed music fans at the same venue. The show was organized by Apna Bharat Society Kuwait and Eternity Int’l Travels and Tourism at the Abbas Al-Ostad Hall located in the Al-Arabi Stadium, Mansouriya on Friday May 10 from 7.30 pm onwards and supported by Creative Indians Association.

Kuwait: Sukhwinder Singh gets candid about life, career and Bollywood 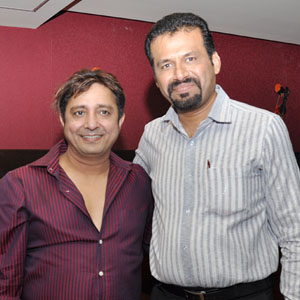 Kuwait, Jun 2: Sukhwinder Singh is an Indian singer best known as Bollywood playback artiste. Singh is famous for the song "Chaiyya Chaiyya" for which he won the Best Male Playback Award at the 1999 Filmfare Awards. The song, from Mani Ratnam's 1998 film Dil Se.., was composed by A R Rahman, written by Gulzar, and sung in duet with Sapna Awasthi. Singh later gained more international fame for singing "Jai Ho" from the film Slumdog Millionaire, which won an Academy Award for Best Original Song and a Grammy Award for Best Song Written for a Motion Picture, Television or Other Visual Media. 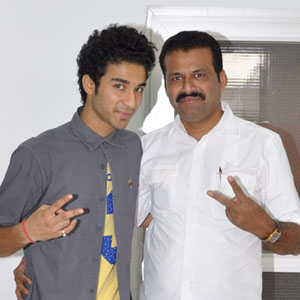 The programme was attended by Dance India Dance fame Raghav Juyal who also judged the show as well as entertained the audience with his dance performances. Another highlight of the show was the presence of Comedy Circus fame Raja Sagoo who was also compere for the event. 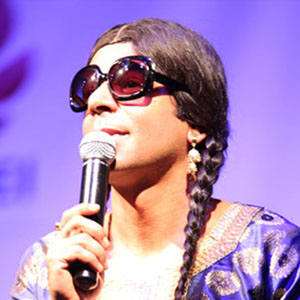 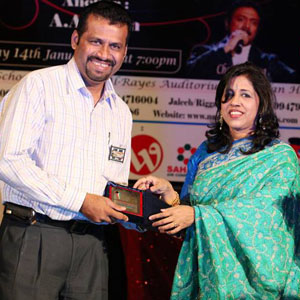 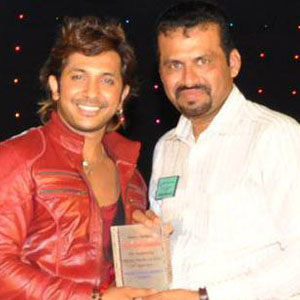